Ethnic map of Slovenia according to the 1981 population census

Ethnic map of Slovenia according to the 1981 population census 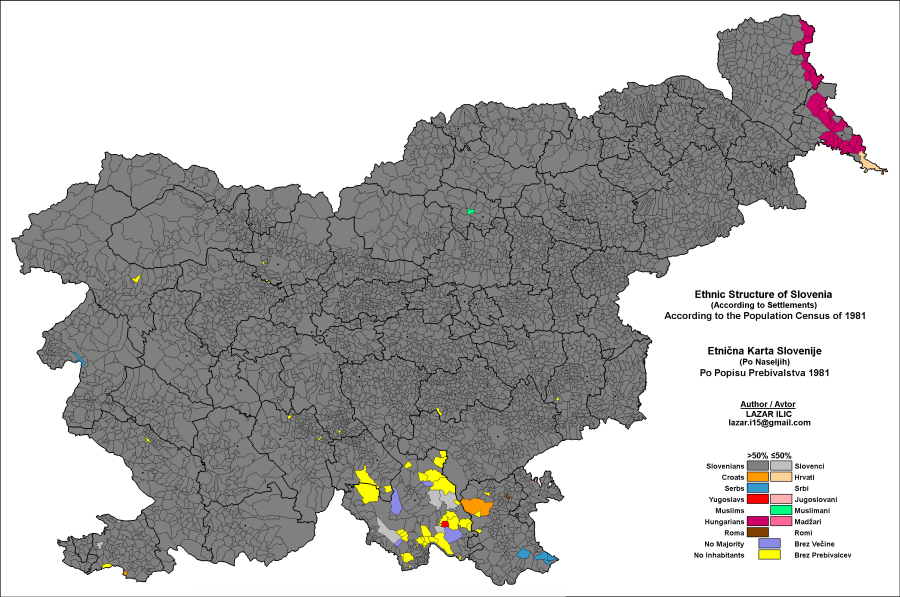 ‘Surprised there aren’t any Germans

Austrian here. Whilst much of now slovenia used to be part of austrian regions in imperial times, they were populated by slovenes, there were maybe minor german people in the cities and some in the south.

Rather there are slovenes in austria now, and there used to be many more, they only form the majority in one tiny county now (Zell in Carinthia) but the slovenes have City names for everything in carinthia.

The more surprising thing is the lack of italians here, i have lived in slovenia and you will definitely hear loads of italian on the coast

There was one distinct area where Germans formed a majority since the middle ages, the Gottschee county. Germans there were well integrated, (for example the author of the well known map of United Slovenia, Peter Kozler, was a Gottscheer) and for the most par did not want anything to do with the Nazi regime, but the Communists used them as an easy scapegoat and expelled all of them. However, it is also true that Carinthia, which was about 40% Slovenian in the middle of 19th century, is now almost completely Germanized due to harsh discrimination and pressure against Slovene language, which only lessened in the last few decades.

Unlike the Germans, Italians left voluntarily and were not expelled, although their fear of the new communist regime was not unfounded. However, what is not so well known is that up to a half of these Italians were no Italians at all, but Slovenes and Croats who opposed Communism and had to flee. In their place, many communist loyalist from southern parts of Yugoslavia were settled. Today, about 1/3 of the population in the Coastal miunicipalities in Slovenia is of non-Slovene descent.’